Heart of the Lakes Triathlon is one of those must-do races.  The venue, volunteers, course marshals, and announcers are all top notch.  This is a pretty special race for me as it was my first triathlon ever as well as the race I asked Emma to marry me at back in 2012 :) 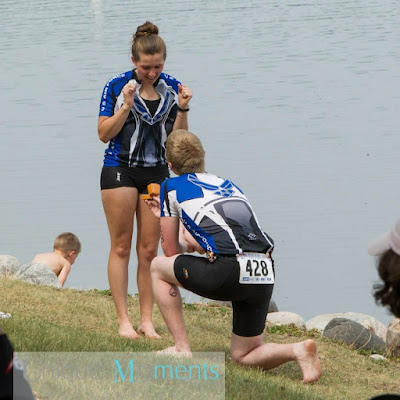 With that being said, fast forward 5 years to this year's race...

Leading up to the Race
This was my first official race that I would be doing as an amateur elite. Coming off a pretty successful race at Madison 70.3, my spirits and aspirations for this race were pretty high.

The build up for this race was typical of other races this season, a lot tempo runs and interval rides.  My fitness leading up to HOLT was the best it has been all year, so I was feeling pretty good.

As this race is a modified Olympic, the strategy was simple: swim my arms off, bike my glutes off, and hang on for the run.

Race Morning
In typical race morning fashion, Emma and I were up at 5:00 am to get some food and throw our gear in the truck.

The race is held in Annandale, so it is relatively close to our house.  This made race morning logistics really simple.  Emma and I got to the race at about 7:00 am dropped off our gear, checked in, and got body marked.

Coach met us there at about 7:30 to talk over race strategy.  The race plan was pretty simple, stick with the top guys throughout the day.  After chatting about wattage and pace, it was off to get the bike and run warm up done.

We headed down to the lake to get our swim warm up in, chat with some of our friends, and enjoy the national anthem.  After that, it was off to the corral to get lined up!

Swim
After making my way into the corral, I only had about 30 seconds before the gun went off! I lined up on the buoy line to prep for a fast swim. 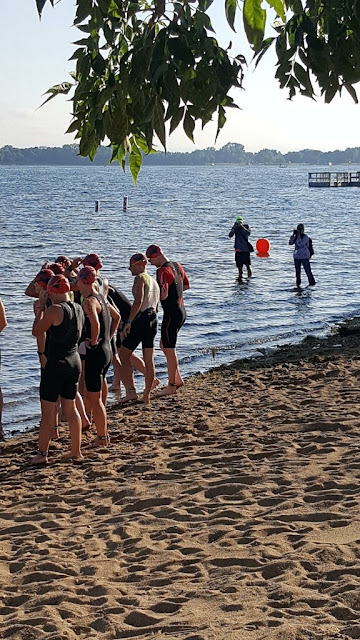 The gun went off and it was time to get to work!  I settled in behind one of the local EMJ guys, Nate Ansbaugh.  The swim was only a half mile, so it went quick.  The swim was extremely choppy, which was really unexpected considering the forecast called for no wind until noon or so.  At any rate, I got on the buoys and pinned it.

Nate and I exited the water 2nd and 3rd in our wave, respectively. I ran up onto the beach and pulled down my swim skin.  On to the bike! 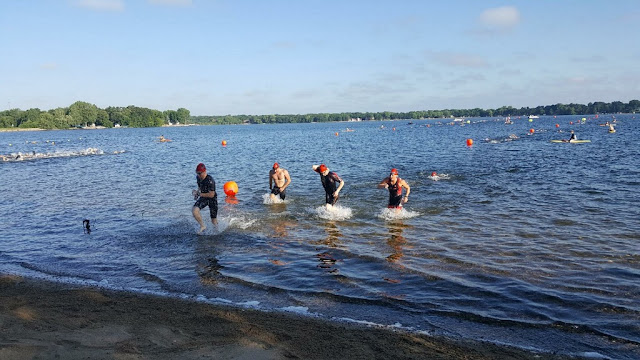 Bike
I got into transition 3rd and quickly threw on my gear.  I pulled my bike off the rack and sprinted to the mount line.  During this time, Sean Cooley had passed Nate in transition and was off on the course.  I started out on the course chasing Sean.  By about the 3 mile mark, I had passed the second place guy and was settled in with Sean just up ahead.

I kept Sean within site for the first half of the bike.  I was executing my race wattage and hydrating.  Things were going really well and it was shaping up to look like Sean and I were going to duke it out on the run course.  That is until disaster struck.

PSSSSTTTTT! The sound no one likes to hear.  My front tire was deflating, crap.  I stopped to check my front wheel and to my surprise, the TLR sealant had plugged the hole!  I could finish the last 10 miles on about 65 psi, no problem!  Or so I thought.  I hopped back on my bike to continue to chase when about a mile later going downhill, full on flat.  Let me tell you, riding on a carbon rim going 30+ MPH is pretty terrifying.  I kept trying to gradually slow down, but couldn't brake as the front wheel would just start to slide out and threaten to take me down entirely.

I finally came to a stop.  Luckily, I had a spare on my bike.  At this point, I knew I wouldn't be able to salvage a podium spot, but that was OK.  I needed to focus on the task at hand, changing my tube in short order.  As I got to work on it, rider after rider whizzed by.  I quickly changed the flat and inflated my tube and mounted my bike.  I only lost 4.5 minutes changing the flat, but in a modified Olympic distance race, that is a long time! 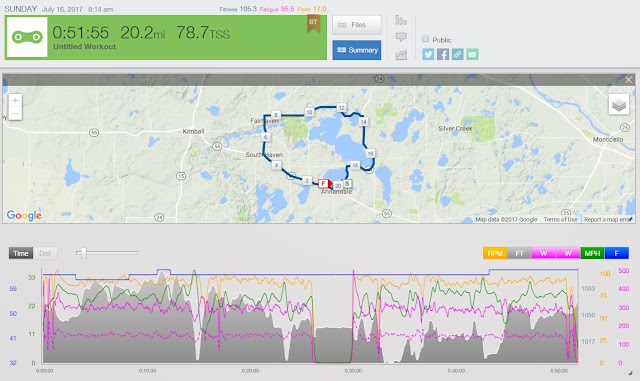 After getting back on my bike, I rode the last miles of the course like I was possessed.  I wanted to catch everyone that passed me during the tube change out.  I finished up the bike falling from 2nd to 10th.  I had some wood to chop!

Run
The strategy here didn't change despite the flat.  Run hard.  I grabbed my run gear and tore out of transition.  After getting onto the run course, I couldn't see any other competitors in the elite field until about mile 2.  I made it a goal to catch the three guys I could see and pass them.

I managed to reel those three guys in and make the pass.  After that, I was alone for the entire run.  It was nice to see my coach on the course along with my mother-in-law toward the finish.  Other than that, the run was really uneventful.

Post Race
Although the day didn't play out like I had hoped, any day on course is a good day.  Despite the flat on the bike, I had my fastest swim and run splits at this race.  In addition to that, it was pretty cool to be racing in the elite wave and managing to be competitive.

I will be reflecting on this race to fuel future efforts for sure.  As always a special thanks to Emma, coach, family, and friends for supporting my multi sport endeavors!  Until next time, happy training!