This race is always special for me.  It not only signifies the start to the multi-sport season, but also is a way to test yourself after some long winter training months.  This year was no different.  There were a couple of exceptions though.  First off, this marked Emma's official return to racing after brutal hip arthroscopy back in September.  I couldn't be more proud of her progress and will to keep pressing on!  In addition to that, I had just come off a 2 week training block that left me feeling pretty fatigued, so the race was going to be interesting!

Lastly, this year marks the inaugural season racing for Gear West.  I am absolutely humbled to be a part of such a great shop and team.  GW has been a pivotal part of me getting into racing more seriously over the past few years.  I can't thank them enough!

Race Morning:
As usual, it was up early (5:00 am) to get some calories in the tank.  The breakfast of choice for the day: Greek yogurt, granola, whole wheat toast with peanut butter, and a banana with a cup of coffee, nom nom.  During breakfast we ritualistically checked the weather.  45°F and rain, awesome!

After the morning breakfast, it was time to toss the bikes and gear in the truck and head out by 6:00 am.  We got to Orono High School by 7:15 am to get transition set up and shake off some administrative cob webs of setting up your gear properly.

We ran into some teammates and friends while setting up our transition which is always one of my favorite things about racing.  After chatting a bit, gear check time.  Hopped on the black dragon and made sure everything was dialed in, check.

After the gear check up, we listened to the standard shenanigans and pre-race announcements by the one and only, Jerry MacNeil.  That guy never ceases to crack me up and amaze me with his elephant brain.  So much knowledge about EVERY racer.  Seriously, its incredible.

After the pre-race activities including a couple bathroom breaks, it was time to line up to start the Du!

Run 1:
BOOM! Gun went off and we started out and with the first few steps, gah, fatigue!  After running about a mile at a decent clip, I found my legs (phew!).  This race always brings some challenges in the terrain department.  This year didn't disappoint! The theme of the day: cold, wet, and muddy!  Let me tell you, trying to run fast on sloppy grass and wood chips is no easy task.

After running with the lead pack into transition, it was time to test the race day bike legs!

Bike:
After getting through T1 relatively quickly, I hopped on the whip and was on my way.  Goal for this bike was to try and hang on and stave off the residual fatigue in the legs.

The bike was relatively uneventful.  Tried to hang on to my target wattage and stay as aero as possible in the cold rain and wind.  I could see the lead pack for the majority of the ride.  Unfortunately, I didn't have the watts in my legs to reel them in which was expected.  Not a problem, onward!  This bike ride also served as a testing ground for some new equipment that I acquired in the off season, which included a new aero helmet and race kit to name a couple.

It really felt good to get out on the bike and "race" again, man I missed that!  After getting through the cold and rainy bike, it was time to finish off the Du.

Run 2:
I flew into T2 and threw off my helmet and bike shoes to get back on the run. Ugh, the legs were trashed.  I headed out and took a few deep breaths to gather myself.  Time to get it done!  I could see a guy about 200 yards in front of me the entire run.  Like the bike, I didn't have it in my legs to reel him in.  Other than a couple of slips and falls in the mucky grass, this run was relatively uneventful.  I rounded the last corner and cranked it to cross the finish line.

Overall, it was a really good day considering the training block leading to this race.  I am definitely pleased with my performance and am extremely grateful that I get the opportunity to race! 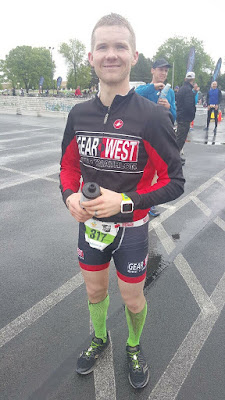 After the race, it was time to make sure to bring Emma home after her inaugural race after surgery! Go Emma!!!!! 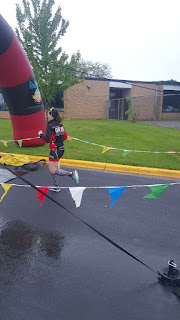 It was awesome to see Emma racing again! As a true student of multi-sport racing, it makes me so happy to see her doing what she loves again :) 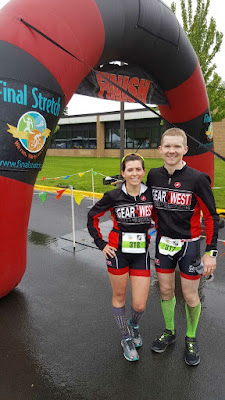 Now it's time to kick back, get some food, and recover for Madison 70.3 in a couple weeks.  Until then, happy training! 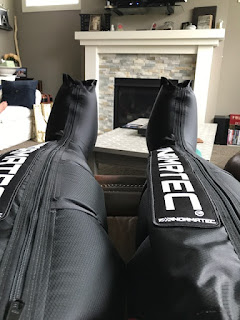